Rob Mosbacher, Jr., is Chairman of the Board of Mosbacher Energy Company, a family-owned energy business headquartered in Houston, Texas.  He served as the ninth President and CEO of the Overseas Private Investment Corporation(OPIC) from 2005 to 2009, an independent agency of the U. S. Government that has facilitated over $25 billion in investments in developing countries around the world.  Since that time, he has served as Co-Chair of the Consensus for Development Reform (CDR), a platform of leading conservative and private sector voices for more effective U. S. global leadership through reforming and improving our approach to global development.

He played an instrumental role in the drafting and passage of the BUILD Act, a bipartisan piece of legislation passed in 2018, that combined OPIC and the Development Credit Authority ofUSAID, into a new US International Development Finance Corporation (DFC).  The DFC has new powers previously lacking from OPIC, that enable it to compete more effectively against other international development finance corporations, multilateral development banks, and other superpower economic development players such as China.

Under the BUILD Act, the DFC was required to create a Development Advisory Council of outside experts to report directly to the Board of the DFC on how well the agency is discharging its statutory obligation to maximize the development impact on the host countries of all projects approved and funded by the DFC. Rob Mosbacher was recently named Chair of that Advisory Council.

He also serves on the Board of the National Archives Foundation.  In2009, he re-joined the Board of Devon Energy, a large, independent oil and gas producer, and served on the Board of Calpine Corporation, one of the largest independent power companies in the U. S., until the company was taken private in March, 2018.

Before moving from Houston to Washington, DC, to head OPIC, he served as Chairman of the Board of The Greater Houston Partnership, The Greater Houston Area Chapter of the American Red Cross, and The Methodist Hospital Board.  He served on the Board of The Salvation Army from 1991 – 2005, and was Chair from 1999 – 2001.  He has been a volunteer bell-ringer for over25 years.  He is founder and formerCo-Chairman of Rebuilding Together Houston.

He received a law degree in 1977 from SouthernMethodist University, and a Bachelor of Arts degree from Georgetown University in 1973. 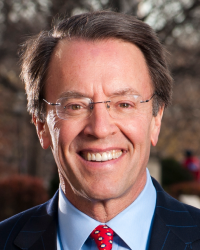