Dr. Tessie San Martin brings extensive experience in both human development and humanitarian response to the role of Chief Executive Officer of FHI 360. A vocal advocate for gender equality, she has dedicated her career to creating a better and more just world for people everywhere.

Prior to joining FHI 360, San Martin was CEO and President of Plan International USA, an international development and humanitarian organization that partners with adolescent girls and children around the world to overcome oppression and gender inequality.

Previously, San Martin served as group vice president at Abt Associates, a consulting company providing research and technical assistance expertise on a wide range of social and economic policy issues, and as director for the Operations Group of the World Bank’s Multilateral Investment Guarantee Agency (MIGA).

She has more than 30 years of experience working as an executive in the public and private sectors, bilateral and multilateral development agencies and academia, focusing especially on economic growth and political reform. She has been a forceful advocate for aid effectiveness, serving as co-chair of the Modernizing Foreign Assistance Network (MFAN) and a board member of Friends of Publish What You Fund, which supports greater aid transparency, and InterAction, which convenes U.S.-based nongovernmental organizations working to eliminate extreme poverty and strengthen human rights and citizen participation.

San Martin has been published in media such as The New York Times and The Washington Post. She has a doctorate in political economy and government from Harvard University, a master’s degree in public administration from the John F. Kennedy School of Government at Harvard University and a bachelor’s degree from Georgetown University’s School of Foreign Service. 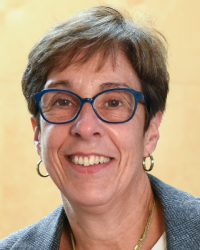